Contrary to popular mythology, technological disruption very rarely happens in a singular flash of brilliance. The image of a disheveled, genius tech founder, manically coding a brilliant new idea in a garage, has a disruptive vision, and lays waste to incumbent operators is a romantic notion. But unfortunately, it's rarely true.
Back to Long Research

Take for example cloud computing which is one of the most prominent disruptions to occur in generations, many would say the cloud was ignited by the historic launch of Amazon Web Services (AWS) in 2006 after Jeff Bezos saw the future of IT infrastructure with on-demand, infinitely scalable computing resources, conveniently delivered over the internet. Meanwhile the legacy operators were completely asleep at the wheel when their businesses were driven off a proverbial cliff as the AWS train came steaming through.

While the ultimate outcome may be true for several incumbents, this explanation is largely incorrect. In fact cloud computing was was far from a new idea when AWS was launched in 2006. The legacy vendors led by IBM but also HP and Sun Microsystems had already thought of the cloud and were pursuing it many years earlier under the name of “utility computing”. While largely forgotten today, IBM actually launched its first “utility computing” service in 2002 and at the time was the world’s largest IT infrastructure company with extremely deep pockets and an almost godlike persona within technology. In fact IBM CEO, Louis V. Gerstner wrote about the vision for “utility computing” at the time in his book “Who Says Elephants Can’t Dance?” (published in 2002).

“The essential idea [of utility computing] is that very soon enterprises will get their information technology in much the same way they get water or electric power. They don’t now own a waterworks or power plant, and soon they’ll no longer have to buy, house, and maintain any aspect of a traditional computing environment: The processing, the storage, the applications, the systems management, and the security will all be provided over the Net as a service – on demand.

Reading that passage from Gerstner’s book sends shivers down the spine, his vision for the cloud has proven to be incredibly prescient and continues to be the cutting edge of the cloud narrative today, despite being authored almost two decades ago!

At the time, IBM was the world’s leading IT infrastructure company with virtually limitless resources and capital access, which coupled with Gerstner’s vision should have easily triumphed over Amazon which was still an online bookseller. So why didn’t IBM succeed in its core market? The answer to this question may be found in the now immortal book “The Innovator’s Dilemma” (published in 1997), in which Harvard professor Clayton Christensen lays out his framework for why large companies have historically struggled to respond to technological disruption.

Christensen posits that large enterprises are highly tuned and deft at responding to “sustaining innovations”, which are technological developments that build and improve upon existing products for an existing group of customers. They are less willing and usually fail to respond to “disruptive innovations”, which involve entirely new products, compete on different dimensions and are attractive to a different set of customers, before ultimately consuming the incumbents market (e.g. Encyclopedia Britannica vs Wikipedia, Blockbuster vs Netflix, Borders Bookstores vs Amazon, etc).

Turning back to cloud computing, perhaps the lesson here is despite IBM having both the vision and resources to create the public cloud, it did not capitalize on it, and to this day this failure continues to haunt it. On the other hand Amazon succeeded in the public cloud, not because it had a new idea, but because it had no institutional baggage. There was no existing IT business for AWS to cannibalize so it went all-in on the idea and sales people were highly incentivized to find customers and sell AWS services (there was nothing else). As a result, Amazon uncovered the latent, organic demand for cloud computing that existed in the market but was invisible even to its customers at the time (software startups and developers). As Steve Jobs said, “people don’t know what they want until you show it to them”.

While vision is important, execution is critical and ultimately what separates multi-billion-and-trillion dollar, industry leading innovations from stories of what-could-have-been and footnotes of history. We leave you with some notable examples of such innovations and some of their predecessors, many of which I’ll confess to never hearing of before! 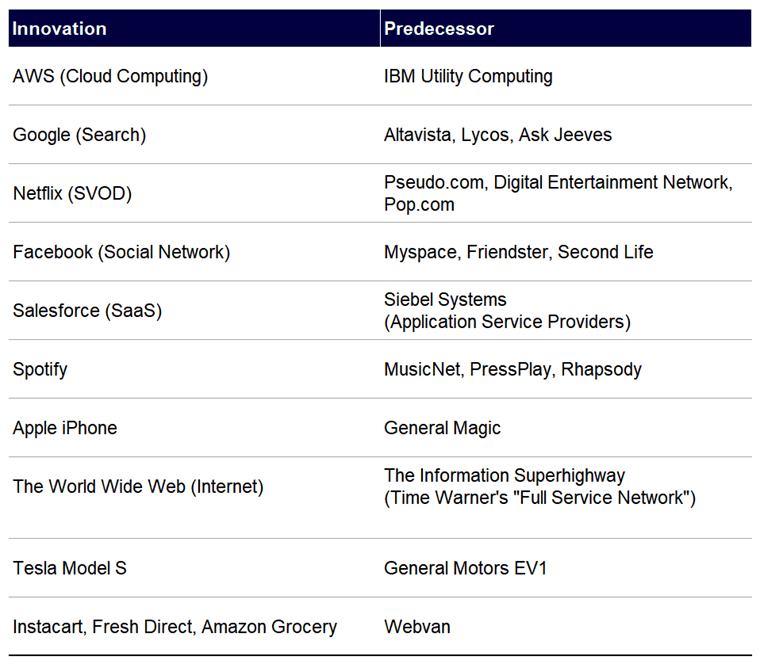 At Montaka Global we meld a combination of expert deep sector and market knowledge with robust valuation disciplines in our pursuit of selecting excellent businesses that are long-term winners, entwined with specialist short-selling expertise as we look to capture the great innovations of our time and avoid their disrupted predecessors.