Blackstone - the alternative asset management firm stands at the edge of an incoming, multi-decade, secular inflection across asset management. What makes us believe that Investors have a window of opportunity with Blackstone right now? Read on to know our analysis.
Back to Long Research

Stephen Schwartzman, co-founder and CEO of Blackstone, is one of the richest people on the planet with a staggering US$39 billion fortune amassed over a glittering four decades at the top of private equity and alternate asset management.  Rather than sailing into the sunset and enjoying his unfathomable riches on a beach somewhere, Schwartzman is making some of the biggest calls of his career, sighting a new, powerful paradigm on the horizon for Blackstone.

After handing down Blackstone’s second quarter 2021 results in July, Schwartzman made a bold statement on the investor call:

“The second quarter [2021], in my view, was the most consequential in our history, not just in terms of financial results but more importantly, in terms of setting the foundation for the firm’s long-term growth trajectory. We’re seeing significant momentum with our expansion into the retail and insurance channels…these channels represent vast new markets for Blackstone and a new paradigm for growth at the firm“

That’s a big statement, especially for a ~US$700bn asset manager.  Naturally, the question becomes: is he right?  Truth be told, the team at Montaka Global have been on the same page as Schwartzman for many years and wholeheartedly agree with him.  Imperceptible to most, including the market, a powerful secular shift has been gaining momentum beneath the surface of Blackstone for several years.

As Schwartzman indicated, the business now stands at the edge of an incoming, multi-decade, secular inflection across asset management. Its strategies and distribution capabilities have now reached sufficient maturation to nearly triple its total addressable market (TAM). 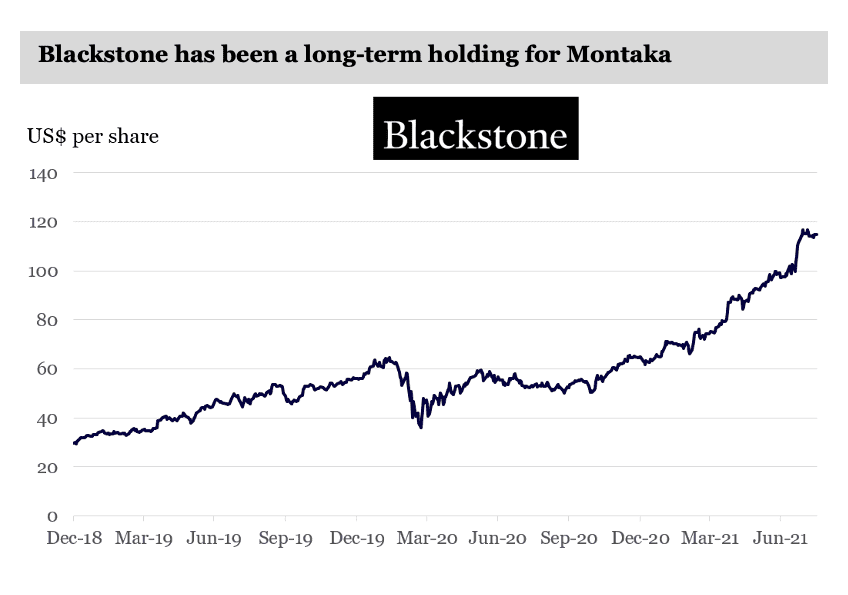 Blackstone has been a long-term holding for Montaka and is now our largest position having doubled in the last year alone. While this is an excellent outcome, we believe many multiples of upside remain. Furthermore, while much of the market has been focused on the amazing long-term potential of the “megacap tech” stocks including Google, Amazon and Apple, our success with Blackstone also highlights that we are finding companies with the potential to compound long-term, outside of technology.

Until now, Blackstone had primarily focused on the enormous institutional market (US$60 trillion) – including pensions, endowments, sovereign wealth, etc – which have traditionally been associated with private equity.  But for years Blackstone has been investing in its platform, building teams, curating relationships and developing offerings that have been absent from the market.  This has culminated in yield-rich, ‘perpetual’ capital products, and regulators becoming comfortable with Blackstone servicing protected sectors like retail and insurance.

As a result, Blackstone’s reach and product capability can now go well beyond institutions. It can now deeply enter and solve the most complex needs for the two huge markets it has been methodically targeting: insurance (US$30 trillion) and retail private wealth ($80 trillion). 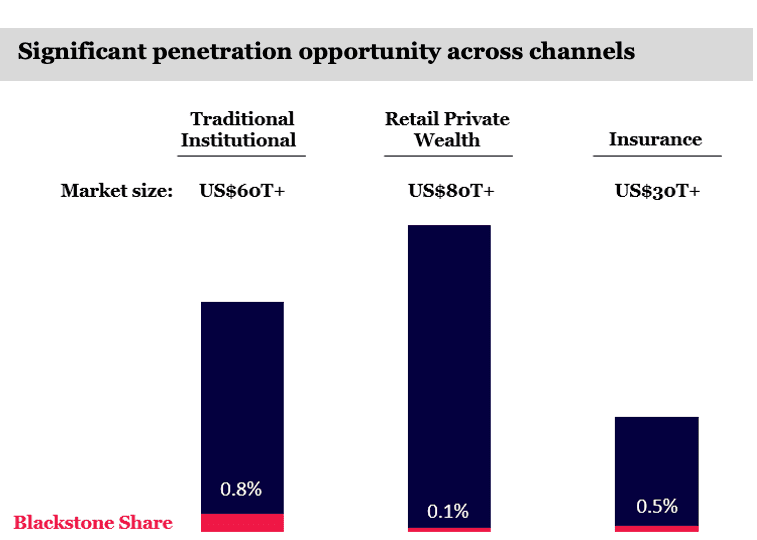 As you can in the chart above, despite Blackstone’s seemingly enormous size (~$700bn AUM), it has barely scraped the surface of the markets it is now better equipped to serve than ever.

Blackstone, for example, is innovating and delivering fresh investment strategies to solve difficult client needs – leveraging expertise across real estate, infrastructure, credit, public and private equity – to help insurers meet their long-term liabilities, which is particularly challenging in today’s low-yield environment. With the onset of secularly lower yields, Government bonds are struggling to perform this function for insurers.

Blackstone has also been successful in building out private wealth solutions and opened dedicated sales channels, created product platforms and reduced regulatory frictions around delivering its offerings to advisors and their clients across the world.

A virtuous cycle of scale

Blackstone has entered a virtuous cycle of scale.

The Blackstone brand has become the industry gold standard by leveraging its best-in-class track record of performance, creating valuable new solutions for clients, and building trusted relationships. That means the firm can attract new clients and assets for increasingly lower cost as the flywheel gains speed and the virtuous cycle takes hold. That delivers Blackstone significant operating leverage across the business, which – as you can see in the chart below – is visible through expanding margins which have increased materially and continue to scale. 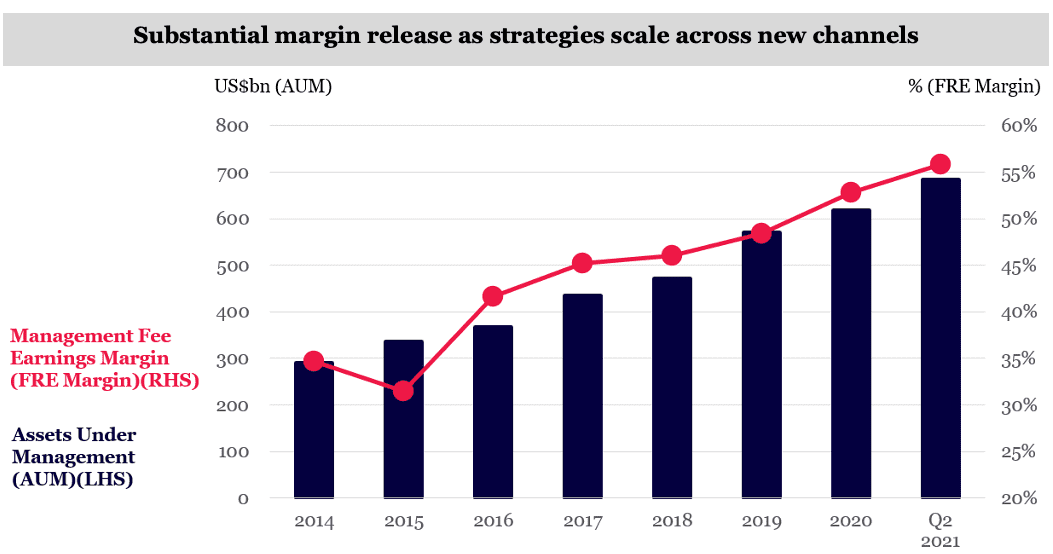 We continue to believe there is significant runway ahead for this virtuous cycle of scale. As Blackstone accesses these deep pools of underpenetrated capital – such as insurance and retail private wealth – asset gathering accelerates, profitability inflects higher, and an increasingly more valuable Blackstone secularly compounds for decades to come.

In addition to this virtuous cycle of scale, Blackstone’s revenue is becoming less lumpy.

One of the most significant shifts Blackstone has stealthily executed around its business model over the last several years is progressively moving its earnings mix away from episodic ‘take-private’ transactions – where it buys and delists a company with the intention of relisting it at a profit in the future, in exchange for a performance fee – into much more predictable and consistent management fee streams.

Blackstone was able to execute this by creating new products and fee models, which are not tied to private equity entries-and-exits and hence structurally built less lumpy fee streams. In doing so it has pivoted towards revenues that are tied to managing assets rather than buying-and-selling them.

A good example of this are its ‘perpetual’ (aka ‘permanent’) capital vehicles, which now form the fastest-growing part of Blackstone. These products seek to deliver customers consistent yield. They use long-duration, cash-generative, underlying assets (real estate, infrastructure, credit, etc). Investors pay Blackstone management and performance fees on a recurring, contracted schedule. Unlike private equity deals, Blackstone doesn’t have to sell assets with perpetual capital strategies. They high-grade the quality of Blackstone’s earnings and smooth them out. 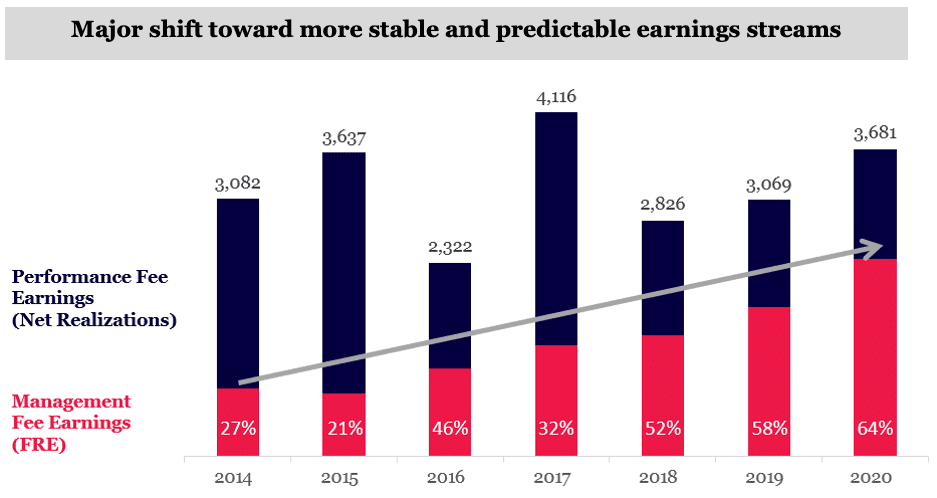 As you can see in the chart above, Blackstone has significantly increased the proportion of fees that do not require the sale of assets, from around a quarter to nearly two thirds of the mix.

The power of sticky streams

This shift represents a significant increase in Blackstone’s earnings quality and the market assigns a much higher valuation to these stickier, recurring streams than their episodic counterparts. 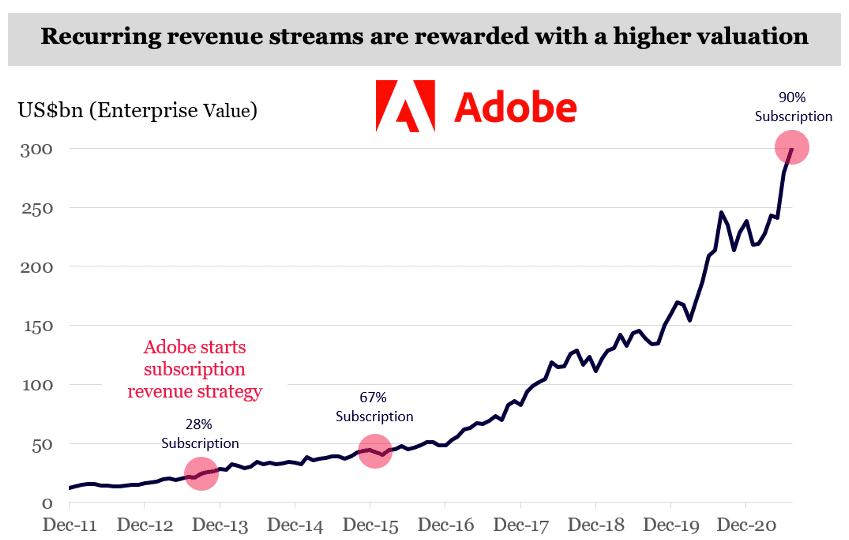 A parallel may be drawn with the software industry which has consistently rewarded such a shift in earnings mix with a higher valuation. Adobe, the graphic design powerhouse serves as a good example.

As the market became increasingly comfortable that Adobe’s newly created subscription revenue streams were recurring and durable (after it moved from an episodic perpetual license product, Creative Suite, to a subscription offering, Creative Cloud) its earnings mix became one of the key drivers behind the >10x increase in enterprise value following the announcement of the pivot in 2013.  In 2013 about a quarter of Adobe’s revenues were subscription based, but they grew to two-thirds of the mix over the following few years. Interestingly Blackstone has undergone a similar journey to date.

We believe as the market becomes more comfortable that Blackstone’s fee-related earnings are recurring and durable, it will reward the business with a significantly higher valuation over time, the beginnings of which we are starting to see now.

A window of opportunity

Blackstone has built its competitive advantages and substantial moat over several decades, but it has never been better positioned than it is today.  From the enormous opportunity to further penetrate massive new markets like insurance and retail private wealth, leverage scale advantages, or the potential valuation re-rating driven by higher quality earnings, Blackstone’s best days lie ahead with significant upside.

Schwartzman summed it up well, “looking forward, I believe we are positioned for an acceleration of growth on almost every dimension, including meaningful expansion of our earnings power”.

Investors now have a window of opportunity. They should embrace this multi-decade, secular growth story before the market grasps and fully prices in what is going on beneath the surface of this incredible business.

At Montaka Global we believe in owning the long-term winners in attractive markets, while they remain undervalued, and we very happily own Blackstone as our top position across our portfolios today.