Many investors are now asking: is China too risky for foreign investors? We feel the answer lies in not avoiding China. But to invest in China properly. Read Montaka's 5 steps to profiting in China.
Back to Recent Blogs

Many foreign investors were shocked in late July when Chinese policymakers announced a ban on for-profit tutoring of specific school subjects. It followed a regulatory crackdown on technology stocks. Investors panicked. Shares in the likes of Alibaba and Tencent plummeted, wiping hundreds of billions from their value. The ‘Golden Dragon’ turned and burnt investors.

Many investors are now asking: is China too risky for foreign investors? 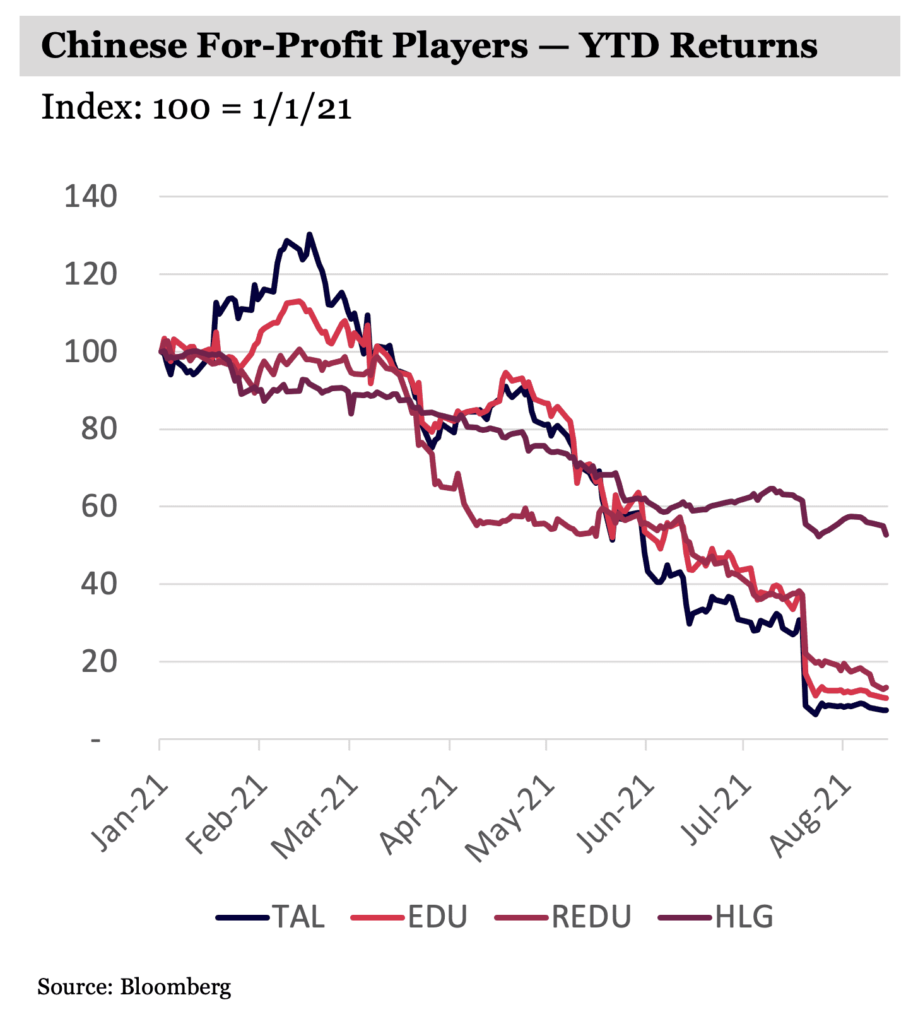 At Montaka, however, we don’t find these recent risks surprising at all. Indeed, they were always present and factored into our investment plan. And we don’t believe China is too risky for foreign investors. The key is not to avoid China. But to invest in China properly.

In past years, we have undertaken a 5-step process, which we outline below, to guide our China investments, to ride the China dragon profitably and safely. It has allowed us to position our portfolio to benefit from the country’s remarkable upside; to manage the risks now being realised; but to also – as we are now — take advantage of the natural volatility of this emerging market to scoop up undervalued shares in some of the world’s best businesses.

1. We assessed the risks

Several years ago, our investment team explicitly pondered the question of whether Chinese investments should be excluded entirely from Montaka’s portfolio. On the basis of the investment risks unique to China alone, a reasonable person could choose to exclude such exposure from their portfolio.

Foreign investors do face a unique set of risks. The Chinese political system is not like those in Australia, or the US or Europe. China is under one-party rule (the CCP). The party formally sits above the country’s legal Constitution. And the party is increasingly under one-person rule of General Secretary Xi Jinping. In 2018,  China removed the two-term limit on the presidency, effectively allowing Xi to remain in power for life[1].

The Chinese legal system – a subordinated concept to the CCP – is different. “Bare your swords towards false western ideals like judicial independence,” so said Zhou Qiang, China’s Supreme People’s Court president in 2017[2]. In case there was any doubt about how China’s courts prioritise party interests.

China ‘socialist market economy’ means that social objectives can trump commercial norms[3]. The ‘rules of the game’ that foreign investors often expect can be contradicted. We saw that with the for-profit education sector, where the simple stroke of a pen wiped out more than 90 percent of the equity value of several listed Chinese education businesses[4].

2. We framed the opportunities

But Montaka is a global equities investment firm. And China is the world’s second-largest economy with significant investment opportunities. We decided that totally excluding China may not be in the best interests of Montaka’s investors.

China’s economy has been growing at faster rates than most. As such, China is home to significant investment opportunities that global investors should rightly consider.

Chinese consumers, for example, now account around one quarter of global consumption growth, which rivals the growth share of US consumers. And this will only continue over the coming decade as China’s middle-class continues to build their wealth. 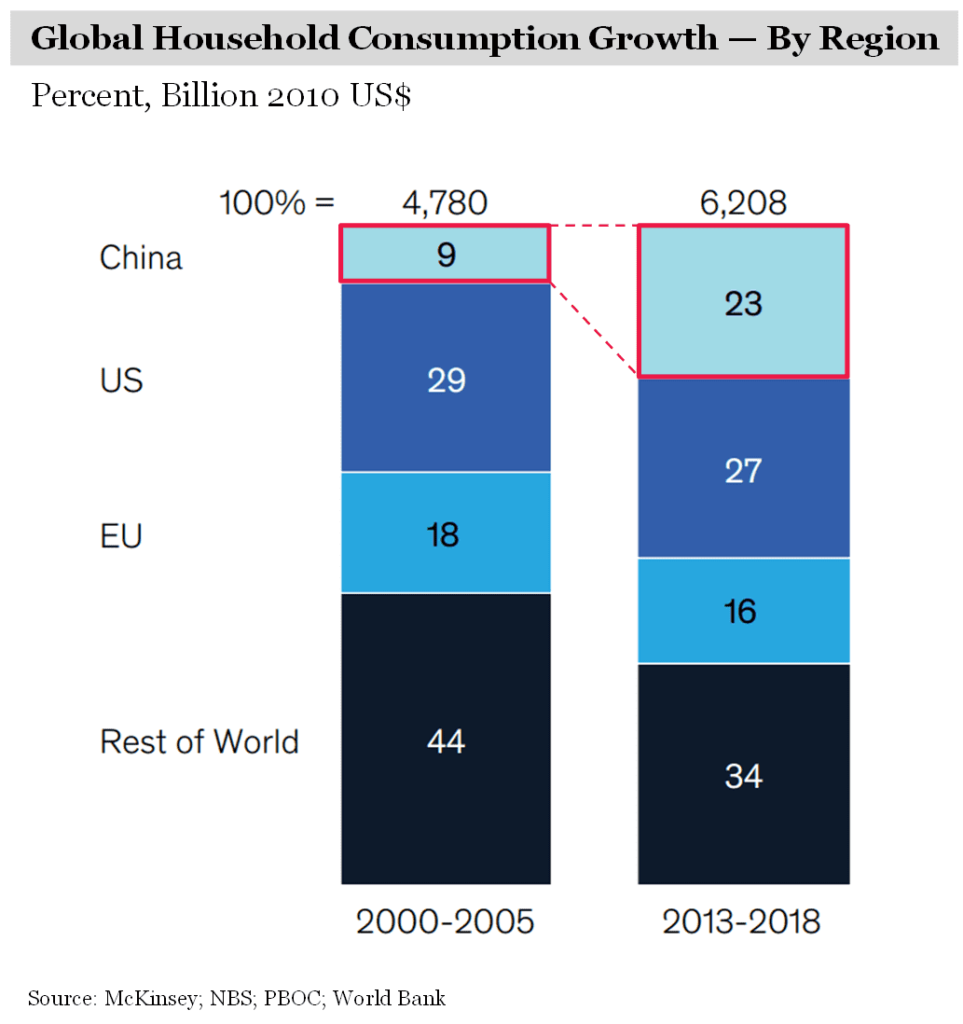 Investors sometimes forget that China is also arguably the global leader in the digital economy. The country has one billion internet users, adding more than 85 million (i.e. five times Australia’s entire online population) since the depths of the pandemic in March last year[5]. E-commerce’s share of total retail in China, for example, is both higher and accelerating more quickly than other major global online markets. 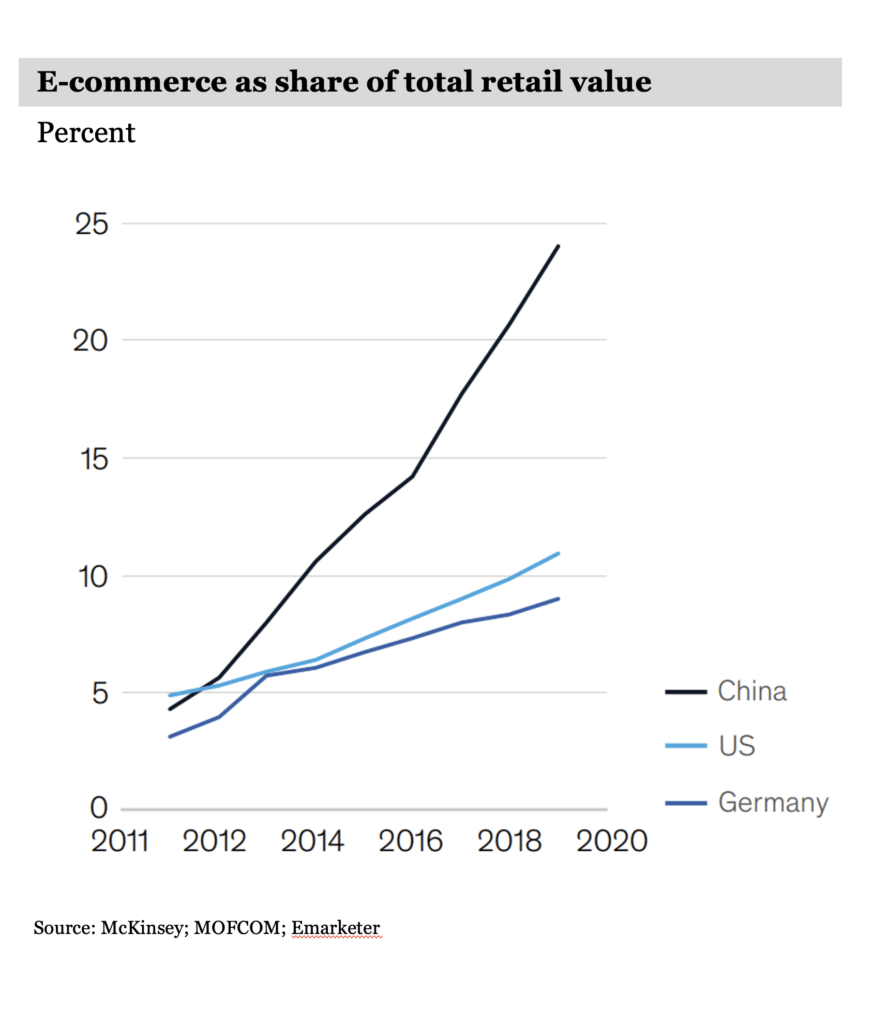 Given the risks and opportunities, and after discussing the issue at length internally and with Montaka’s largest investors, we decided to participate in China, but in a limited and measured way.

That meant keeping Montaka’s portfolio’s exposure to China below 20%. At this level, it’s meaningful enough to contribute to Montaka’s long-term compounding, while also small enough to manage the unique risks foreign investors face when investing in China.

Montaka’s approach of ‘dipping our toe’ into the Chinese waters can be observed in the chart below, which shows Montaka’s long portfolio exposure to companies domiciled in China as a percentage of the total portfolio. 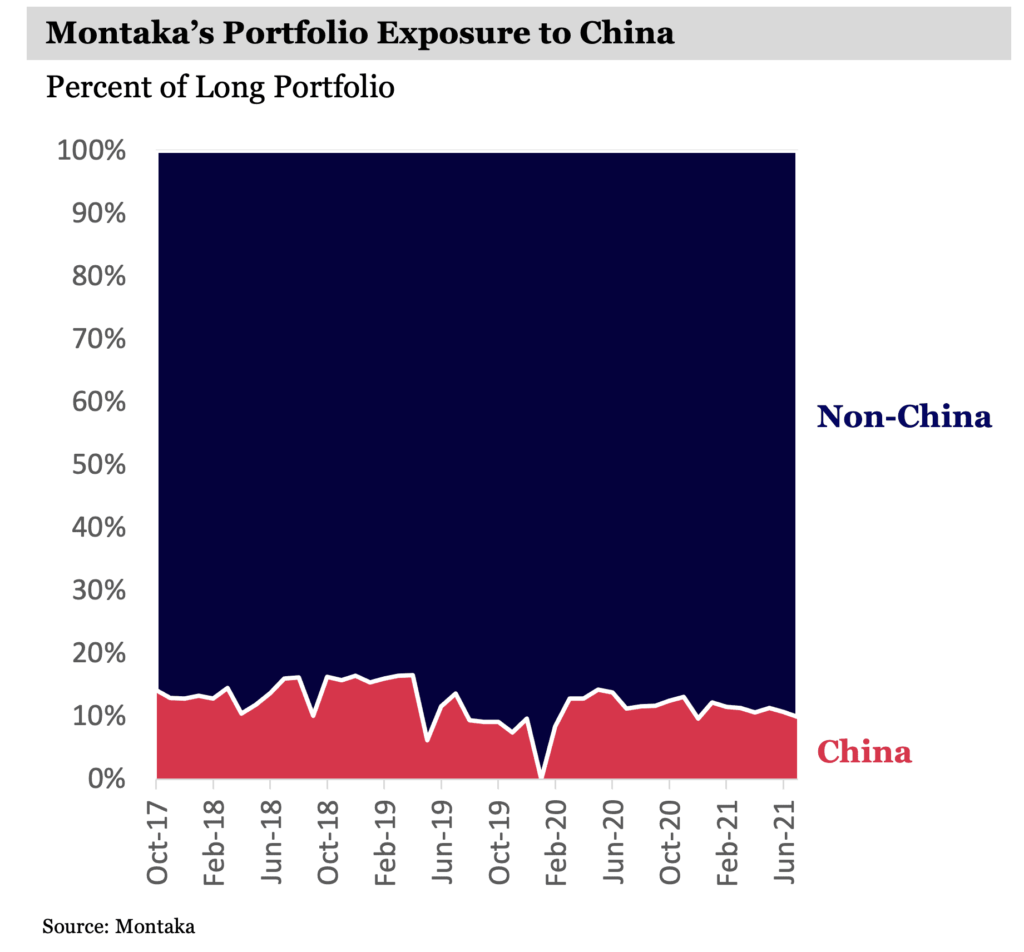 Additionally, we decided to steer clear of businesses perceived to be contributing to societal disharmony, including many of those which have been cracked down upon recently. Last year, for example, China cracked down on online gambling[6]. This year, of course, it’s been the for-profit education sector, which was perceived to be exploiting young Chinese parents.

Now the property-sector which is being perceived as being overrun by speculators. As Xi Jinping said, “Houses are built to be inhabited, not for speculation”[7] – providing ample cover for regulators to effect strong property-cooling measures.

Ultimately, our limited and measured exposure to China also meant focusing on China’s ‘blue chip’ technology businesses, such as Tencent and Alibaba.

These are wildly popular, ubiquitous digital platforms that provide enormous convenience for the Chinese population, as well as enormous business opportunities for businesses, large and small.

While not immune to regulatory risk, as 2021 has demonstrated, their positive contribution to Chinese society is clearly strong, particularly in the areas of poverty reduction, improved social connectivity, and professional productivity.

The increasing data advantages of these businesses and privileged software economics in the context of the world’s leading digital economy makes these businesses compelling investment opportunities.

In framing potential Chinese investment candidates, investors must weigh up the risks of investing in China generally and the specific industry and company risks associated with one’s contribution to China’s social objectives, on the one hand; against the size and degree of under-pricing of the opportunity, on the other.

5. We take advantage of volatility

As you could see in the chart illustrating our long portfolio exposure to Chinese companies, there are relatively small fluctuations that reflect Montaka’s active management of this exposure.

When businesses become more undervalued, Montaka is looking to add more exposure; and vice versa when they look more overvalued. 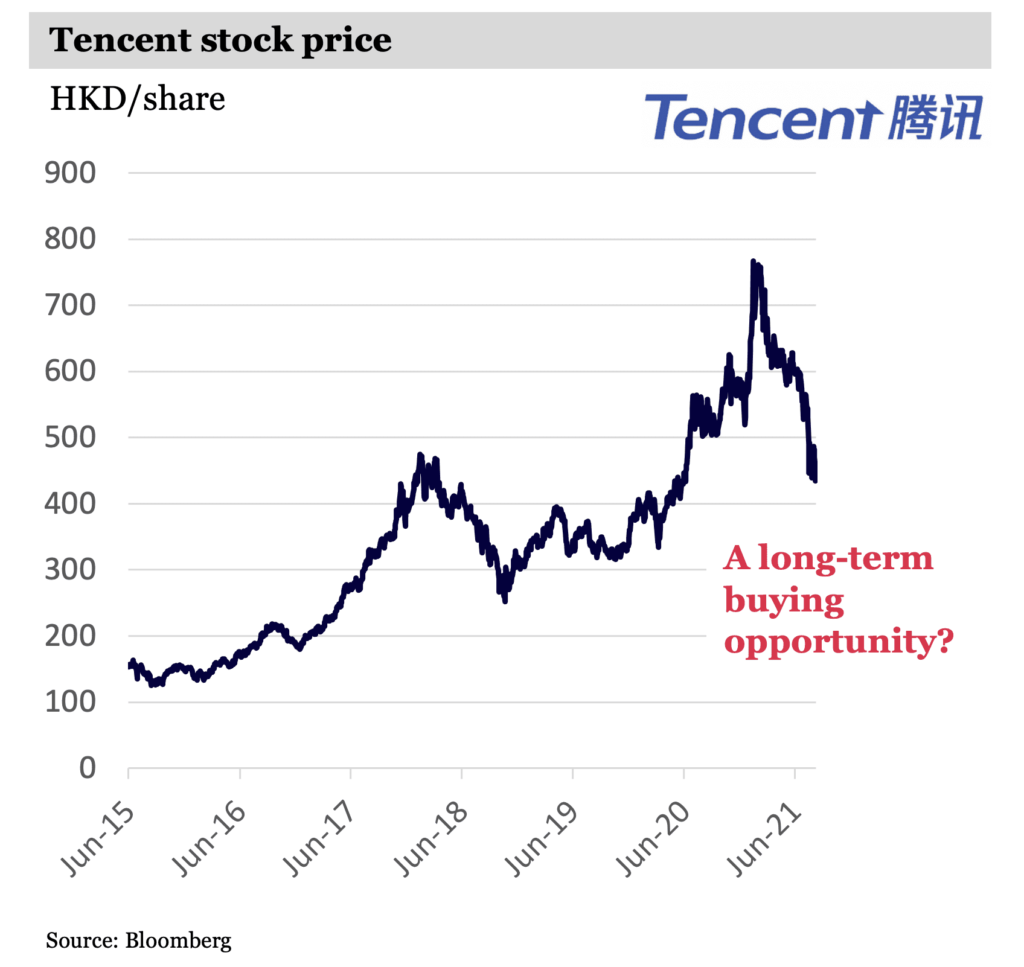 In the recent selloff of Tencent, for example, Montaka added to its position in this long-term opportunity.

So the next time you see stock price volatility in a Chinese sector, don’t be surprised. While this likely reflects the materialisation of a risk, it is unlikely that this risk is new.

But this does not mean that global investors should exclude China altogether. Instead, investors should carefully evaluate opportunities in China and measure them against their own unique set of risks.

Investing in China in a measured and limited way gives Montaka’s investors exposure to some wonderful long-term investment opportunities, while limiting the associated inherent risks.

[3] (SCMP) Why the socialist element of China’s market economy is important, April 2021

[6] (Reuters) Macau VIP casino industry out of luck as China cracks down on capital flows, August 2021