A look inside Montaka’s portfolio

An excerpt from our Montaka Monocle which looks inside our portfolio to show you what businesses we own and why we own them. In this blog you’ll see highlights from the most recent reporting season for our major holdings.
Back to Long Research

As we reflect on the first quarter of 2021, we believe we find ourselves in a rather heterogeneous market. In some pockets, we are seeing hot speculation in SPACs, cryptocurrencies, non-fungible tokens and even Australian property. In others, asset valuations have been muted by a one percent increase in the US 10YR government bond yield on fears that inflation will flare-up uncontrollably.

We see a highly-supportive economic backdrop for long-term equity prices. We have coordinated fiscal and monetary stimulus at a time when the global economy is recovering, following the devastation of the pandemic. We don’t believe core inflation will rise uncontrollably – there are too many structural disinflationary forces that will keep it in check, including demographics, new automation technologies and the elevated level of collective government and household indebtedness all around the world.

We believe this is a great economic environment to own some of the world’s high-probability winners in attractive markets which are set to grow structurally over the coming decade. Here are a few highlights from some of Montaka’s larger portfolio holdings – with competitive advantages and profitable growth opportunities the best they’ve ever been.

Let’s start with YouTube, owned by Alphabet. Did you know that YouTube is now the most important video platform in the world? Accounting for just 12% of Alphabet’s business, it is growing at nearly 50% per annum and offers enormous future potential. And it now reaches more 18-to-49 year olds than all linear TV networks combined! 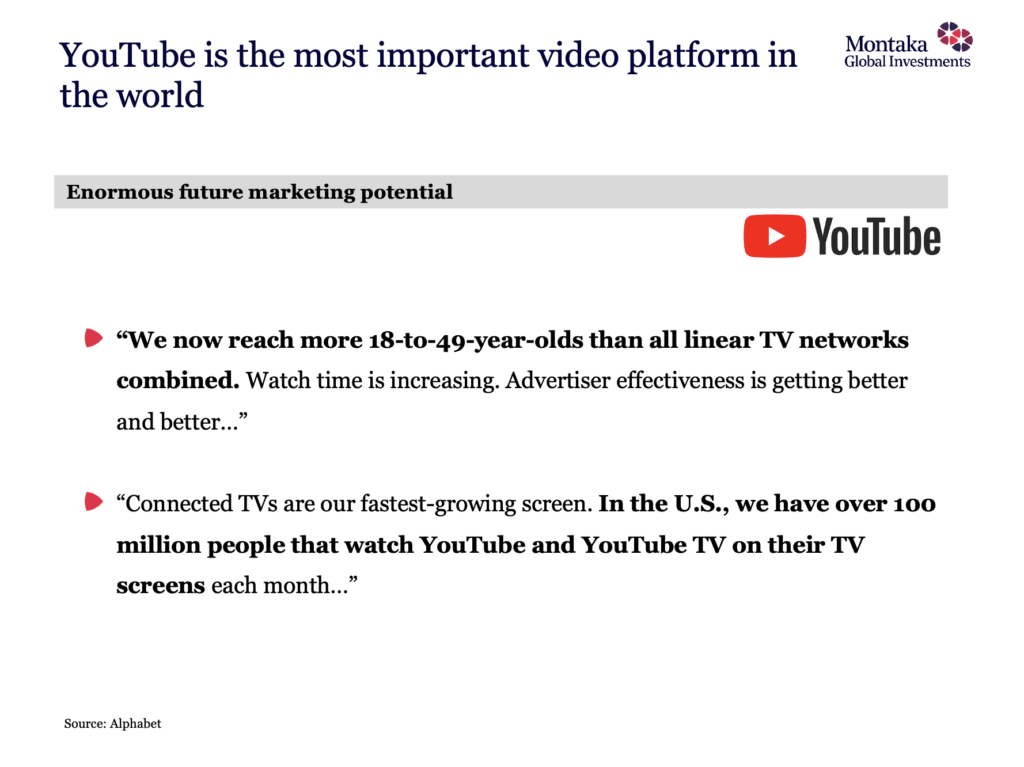 Moving now to Facebook– which has become a favourite punching bag for politicians, regulators and many others. We believe the business has multiple large-scale, profitable opportunities ahead which are not being appreciated by the market. One of these opportunities relates to ecommerce and the new ability for merchants to close transactions inside the Facebook properties. Already, 175 million consumers are interacting with businesses via WhatsApp on a daily basis. This is an enormous long-term opportunity for Facebook: our channel checks indicate the ROIs of ad spend in these closed-loop channels are orders of magnitude higher than the average.

And if that weren’t enough, Facebook is vigorously pursuing leadership in the next consumer computing platform: augmented reality and virtual reality – building on their latest Oculus offering. 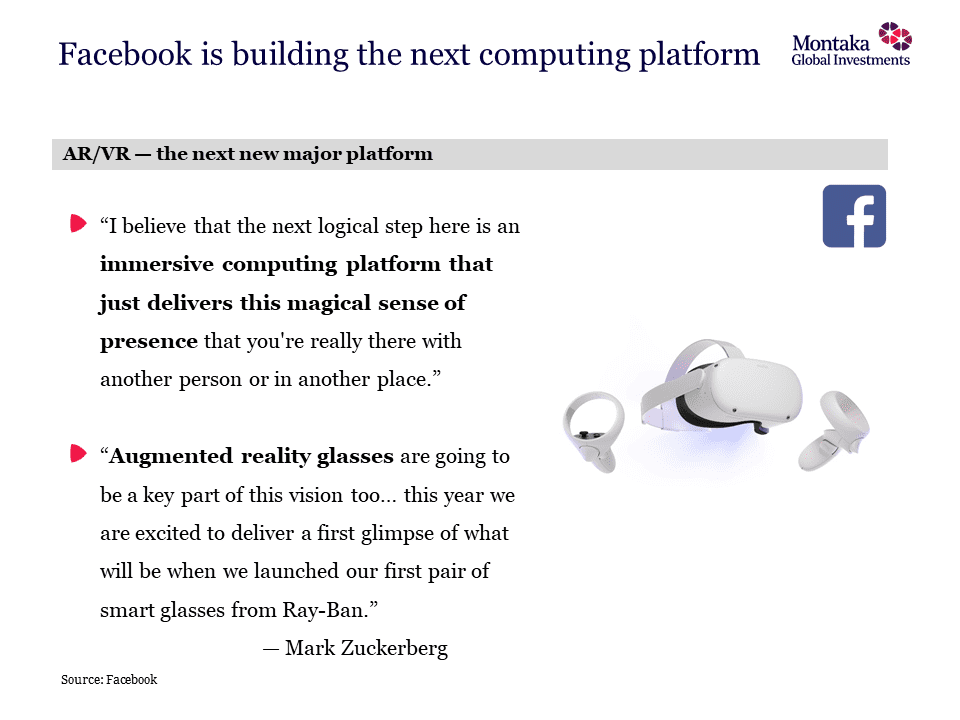 Now, we understand that over the course of this year, the world will experience a strengthening post-virus cyclical economic upturn supported by government stimulus measures. Against this backdrop, we are seeing an increasing degree of short-termism and pockets of excessive speculation – resulting in a general rotation away from some of the world’s most important and advantaged technology platform businesses. We view these as major buying opportunities.

For example, we know that approximately US$6 trillion per annum is being added in incremental global IT spend in cloud infrastructure, intelligent applications, data analytics and cybersecurity over the coming decade. And we know that Microsoft will capture a meaningful share of this, given its global leadership position as the critical technology platform for corporates and governments; and its large scale and expanding data advantages.

The reason we are so confident in Microsoft’s future success stems from the enormous mismatch that exists today between the value Microsoft adds to its customers and the value it extracts. This explains the rapid adoption of higher-tiered (and higher-priced) offerings of Microsoft 365 applications, for example. 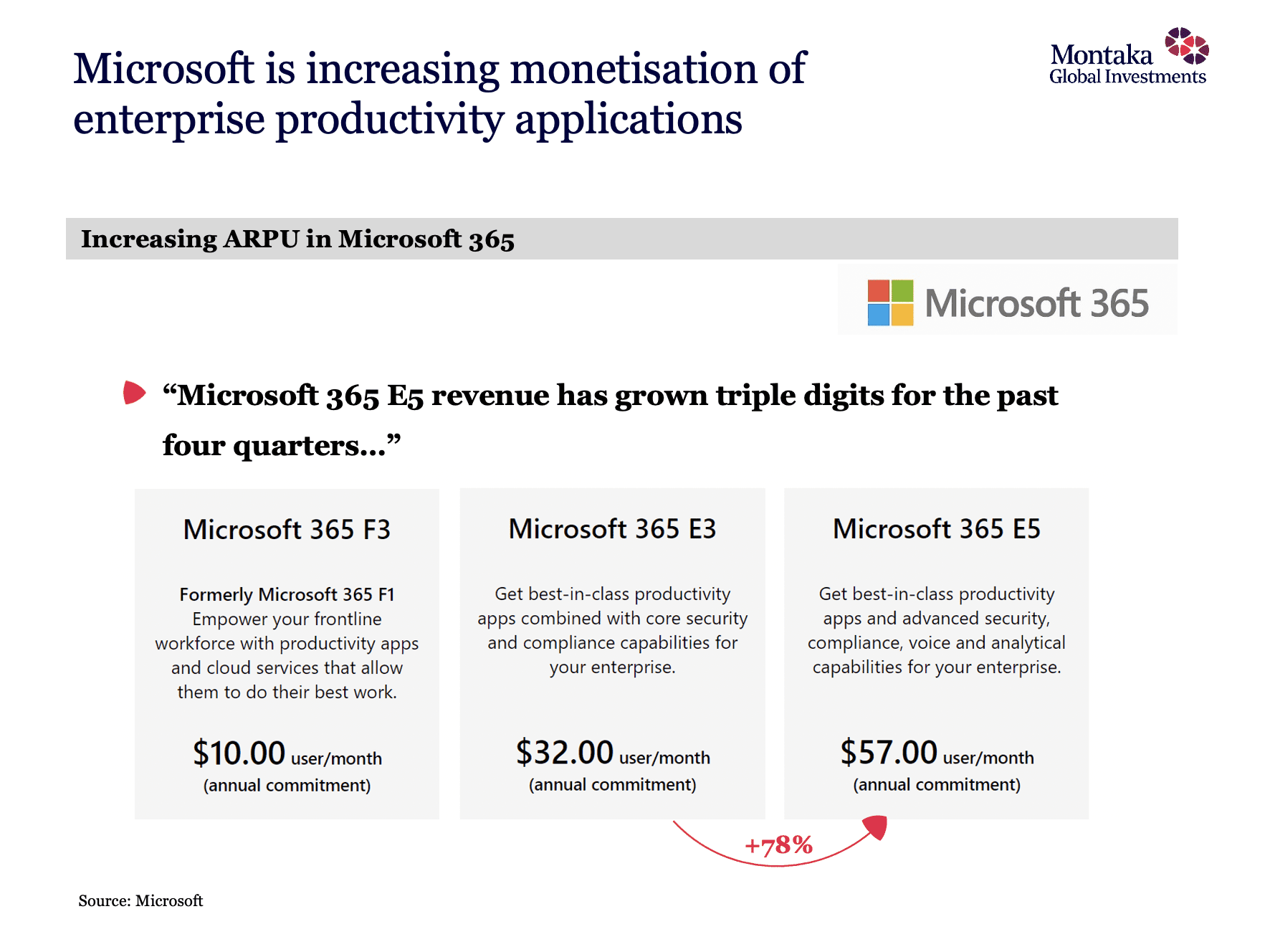 Amazon will also share disproportionately in this structural growth in global IT spend. Amazon owns the largest cloud infrastructure business on planet earth. Today, Amazon Web Services is a US$51 billion annualised run rate business. And its backlog of US$50 billion is growing at nearly 70 percent per annum!

Other businesses we own that are benefiting from the structural digital transformation of corporates and governments all over the world include Salesforce and ServiceNow. ServiceNow, for example, continues to drive enormous cost-saving efficiency gains inside its customers. For every $1 spent by a customer, roughly $5 of productivity gains are created. And ServiceNow – the clear leader in its space with no real competition – is less than three percent penetrated into its multi-hundred-billion dollar per year addressable market.

On the consumer side, businesses such as Universal Music Group (owned by Vivendi), Spotify, Tencent and Alibaba continue to perform strongly. We were particularly pleased to see Vivendi announce last month that it plans to distribute 60% of its holding in Universal Music Group to shareholders in a new, stand-alone listing by the end of the year.

Meanwhile, Spotify continues to significantly expand its podcast engagement and advertising offering. And it has also started to push pricing up for the first time, demonstrating the enormous value it commands in the minds of its consumers. 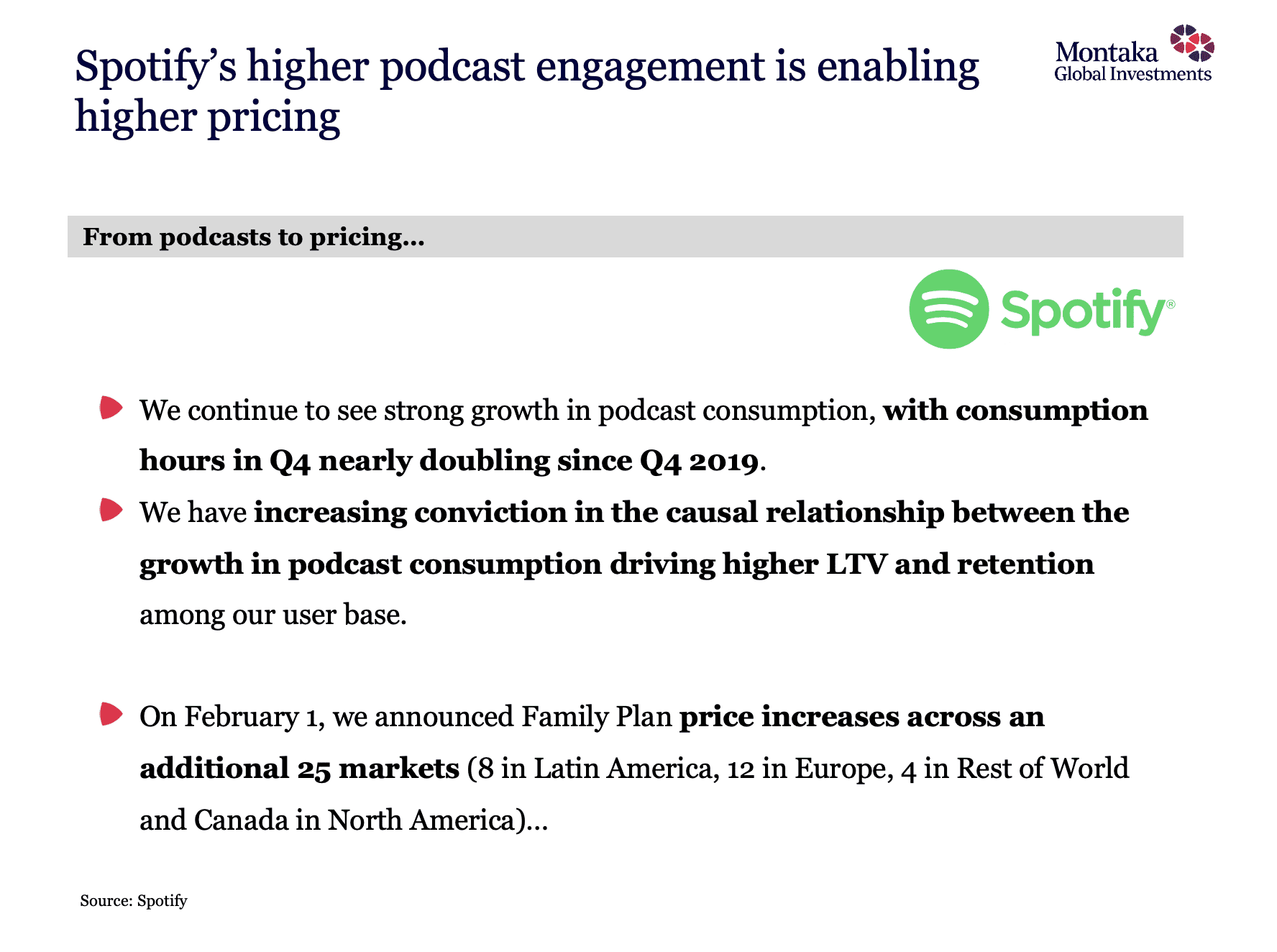 Over recent weeks, investors have become concerned about the prospects of inflation taking off and the resulting knock-on effects this would have on interest rates and equity valuations. In the video below, Andy explains why we believe the market is overreacting. While we understand a cyclical economic upturn has just begun, we believe inflation will remain manageable in the short-term. Furthermore, Andy explains why longer-term, we have a high degree of confidence that the world will return to its low-growth, low-inflation, low-interest-rate environment. 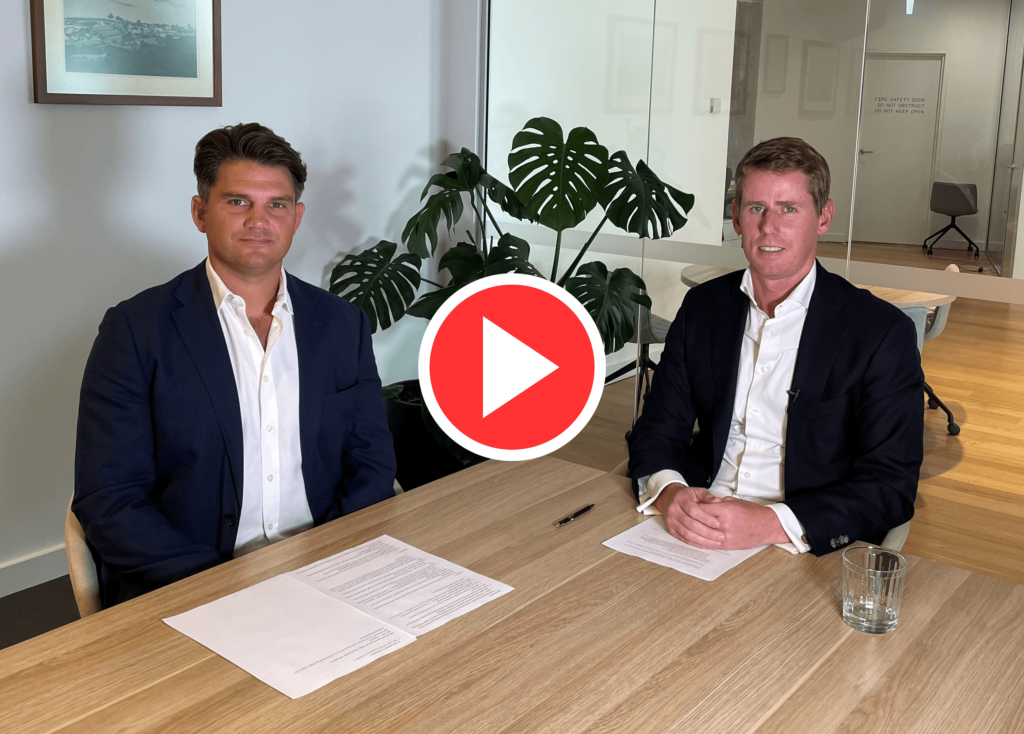 On the basis that we believe interest rates will remain structurally low over the long-term, we are particularly excited about our investment in REA. There is no dispute that Australian residential property markets are rebounding strongly, supported by very low interest rates in the context of an improving economy.

In the month of January, REA reported more than 128 million visits to realestate.com.au – an extraordinary feat, given a total Australian population of 25 million (including children). 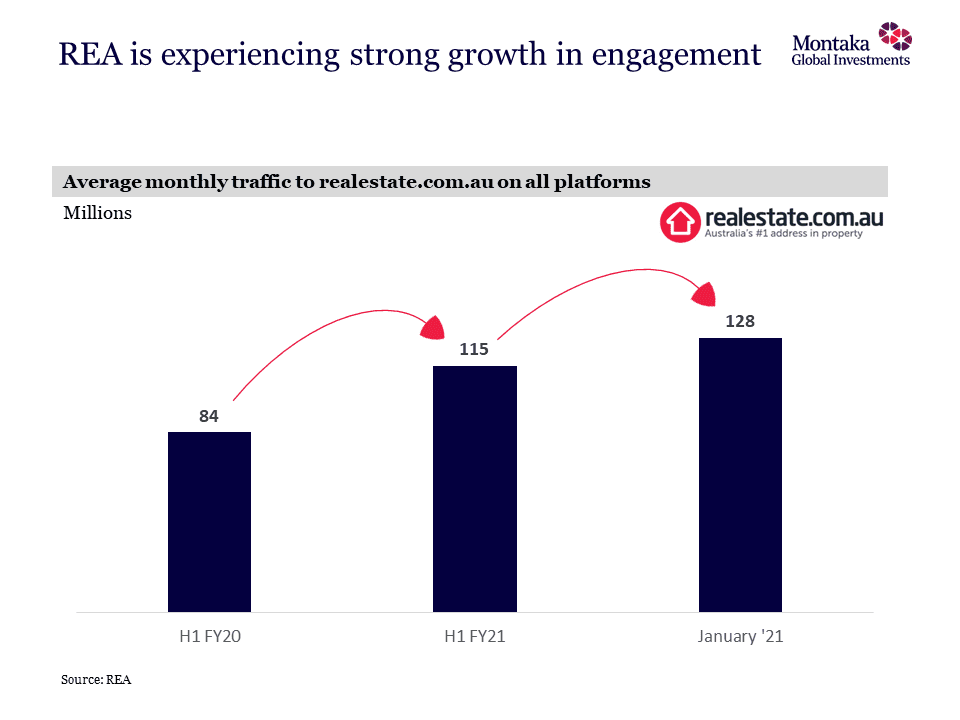 And the long-term low interest rate environment also stands to benefit our alternative asset managers: Blackstone, KKR and Carlyle Group. Institutional investors are increasingly outsourcing their asset management to these major global platforms as the hunt for yield becomes challenging. This structural shift will drive very strong earnings growth for the world’s leading alternative asset managers for many years to come. 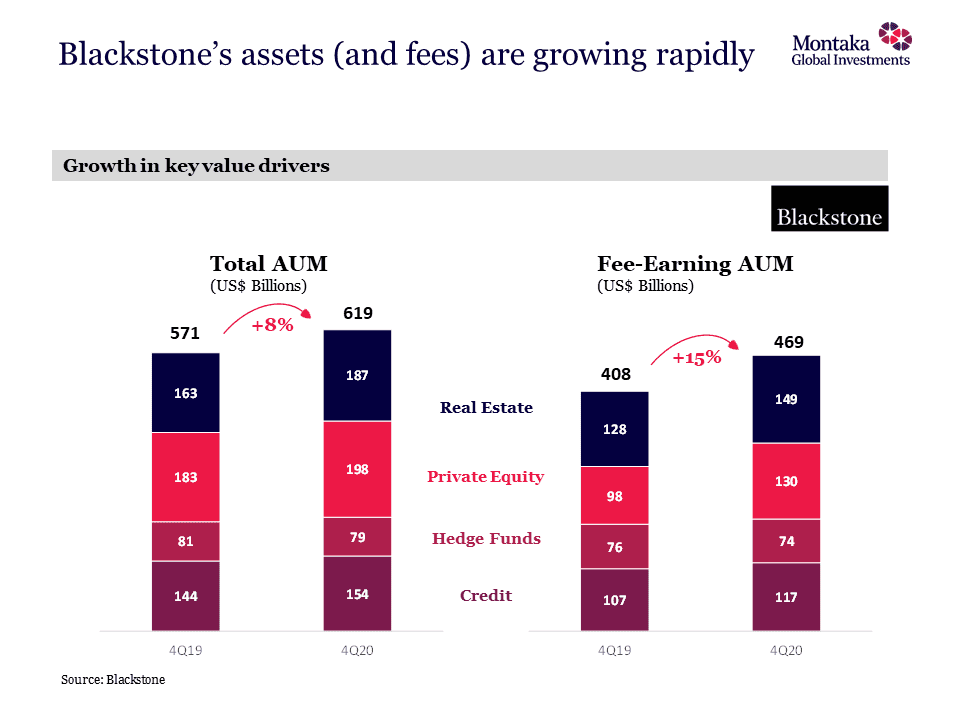