Expensive? Amazon is good value despite its $1.7 trillion market cap

While some investors may worry that Amazon’s massive market capitalization of $1.7 trillion means there can’t be much further upside, we believe this trading range provides long-term investors with an attractive risk-reward opportunity.
Back to Long Research

As the world’s largest e-commerce platform (ex-China) and cloud infrastructure provider, Amazon has been a prime beneficiary of the COVID-19 pandemic, which triggered arguably the biggest acceleration of digital transformation since the advent of the smartphone and perhaps even the Internet.

But despite that acceleration, and despite the business continuing to fire on all cylinders and deliver outstanding results, Amazon’s shares have traded sideways to down over the last eight months. 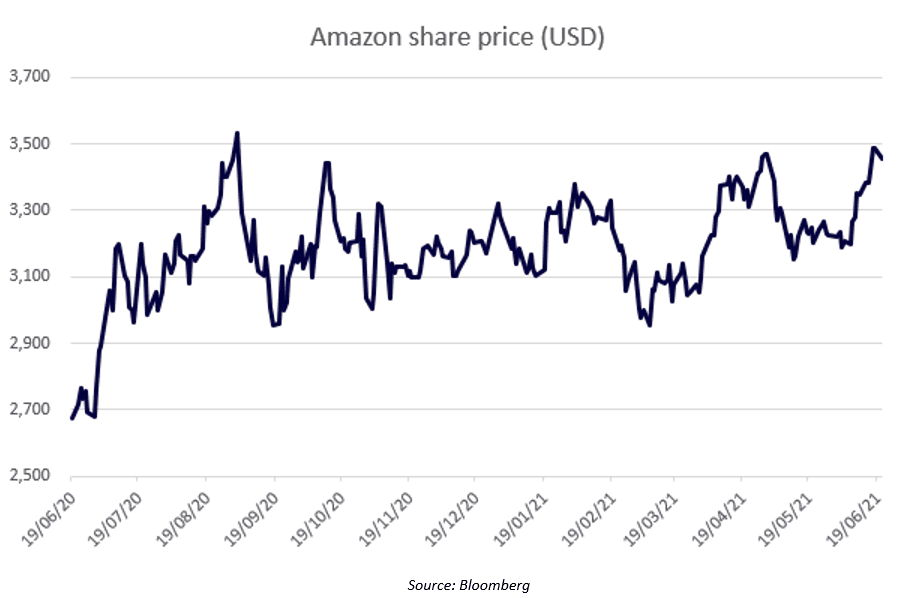 While some investors may worry that Amazon’s massive market capitalization of $1.7 trillion means there can’t be much further upside, we believe this trading range provides long-term investors with an attractive risk-reward opportunity.

Below we look at 5 reasons why Amazon’s core e-commerce and cloud businesses have the potential to accelerate growth, and why Amazon is a top 10 position in the Montaka portfolios.

Amazon’s largest market, US e-commerce, saw tremendous growth throughout 2020 as the pandemic forced stores to close and consumers to migrate online. E-commerce penetration as a percentage of retail sales jumped from 11% in 2019 to 14% in 2020. That was driven by predominantly offline retailers and brands that had underinvested in e-commerce and now scrambled to meet consumers online.

Yet, despite this influx of competition and capital, Amazon still managed to grow its share of the U.S. e-commerce market, an impressive feat considering its immense starting base. Amazon’s retail business has now evolved into a fulfilment, distribution and logistics juggernaut that continues to widen and deepen its ‘moat’, which will protect its market share and profit from competitors over the long term.

Some investors have expressed concern that Shopify, the ‘anti-Amazon’ e-commerce software company that had a blistering 2020, will undermine Amazon’s leadership position in the U.S. e-commerce market.

But we estimate Amazon spent nearly $30 billion capex during the pandemic-ravaged 2020 to expand the capacity of its fulfilment network by 50%.  That’s well over 100 million square feet — or nearly 10 million square metres — of additional space in one year.

In just one quarter, Amazon spent more cash upgrading its fulfilment network than the total revenue Shopify has ever generated, so one can imagine the Herculean challenge that Shopify faces in usurping Amazon.

Competitors can copy checkout accelerators and membership programs, but Amazon’s fulfilment and logistics network is nigh on impossible to replicate because of the prohibitive capital investments required.

Amazon’s non-AWS operating profit of $9.4 billion included $11.5 billion of COVID-related costs, which should fall away as we move beyond the pandemic. That suggests the company’s e-commerce operating profit is actually closer to $20 billion, or nearly four times the profit generated in 2019. 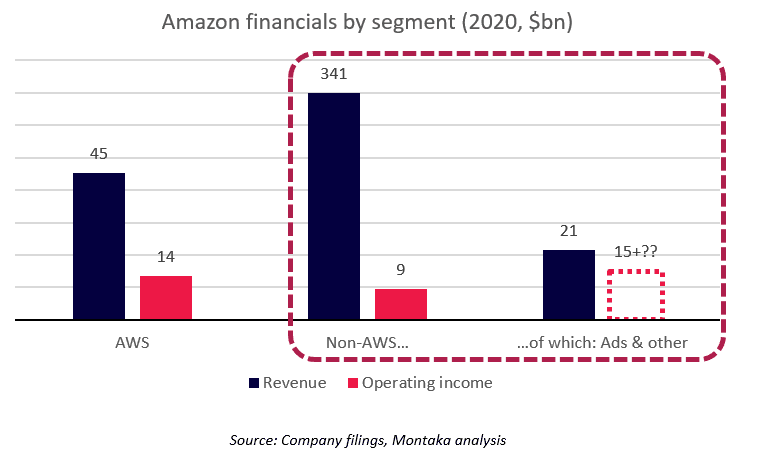 The key contributor to this profit is Amazon’s rapidly growing advertising business, which is buried within its ‘Other’ revenue line and likely exceeded $20 billion of revenue in 2020 with year-on-year growth of more than 50%.

If we take Facebook’s gross margin (81%) or Google’s gross margin excluding traffic-acquisition costs (73%), and ascribe some small amount of other operating costs, it suggests Amazon’s advertising business could be generating more operating income ($15+ billion) than its AWS business ($13.5 billion).

It is a distinctly Amazon move to build an ancillary advertising business, that is now more than twice the size of Twitter, Snap and Pinterest combined, in the shadows of an e-commerce website. This is the kind of optionality we look for in the businesses we invest in.

But this volume was achieved with just one-fifth the fleet size of its largest competitors. That indicates a far more efficient network, with greater density and thus lower costs – important as shipping costs are Amazon’s largest expense item.

Amazon is already investing in the next logical step: expanding Amazon Logistics into a revenue-generating third-party logistics provider for non-Amazon sellers.

5.   AWS remains the leader in an increasingly two-horse race

But the latest battleground between cloud infrastructure and platform providers is the enterprise market, where customers have more specific customization requirements, require more handholding and sales cycles are longer.

Microsoft Azure, the world’s second largest cloud IaaS and PaaS provider, has a natural advantage in this market because of its existing relationships with enterprise customers and the extensive lock-in of Microsoft’s software solutions at the enterprise level.

We estimate Azure is still some way behind AWS with around $26 billion revenue in 2020, though growing faster at 50% year-on-year (Microsoft does not disclose Azure revenues separately).

But since 2019, AWS has started to address the enterprise opportunity by ramping up its enterprise sales force, moving into industry verticals, and offering more hybrid cloud solutions.

What gives us comfort that AWS can meet the challenge from Microsoft’s Azure is the fact that Andy Jassy, the CEO of AWS, will take the helm at Amazon when Jeff Bezos retires as CEO in July 2021. We believe this promotion elevates AWS and the cloud opportunity to the highest priority within Amazon, which is unsurprising considering Jassy believes only 5% of global IT spend is currently in the cloud.

Our conviction is further reinforced by the recent announcement of Adam Selipsky as the next AWS CEO. Selipsky is an 11-year veteran of AWS as head of Sales, Marketing and Support, before leaving Amazon in 2016 to run Tableau. In his three years as Tableau CEO (acquired by Salesforce in 2019), the value of the company quadrupled, giving us confidence in Selipsky’s ability to efficiently allocate capital, sell to enterprise and lead a cloud transition.

As we’ve seen above, it is becoming increasingly irresponsible to stigmatise Amazon as an online retailer that cannot sustain a profit and needs to be subsidised by AWS. All evidence suggests otherwise.

We struggle to picture a scenario where Amazon is worth materially less than it is today. Even if an adverse and highly unlikely antitrust outcome requires Amazon to separate its two core businesses, that may perversely (or fortuitously?) increase shareholder value by finally unlocking any conglomerate discount and showing the world once and for all that both Amazon retail and AWS can stand, run and thrive on their own two feet.

Indeed, we believe the risk-reward of owning Amazon today may still be as high as 4-to-1 and expect the stock to remain a core position in the Montaka portfolios over the long term.