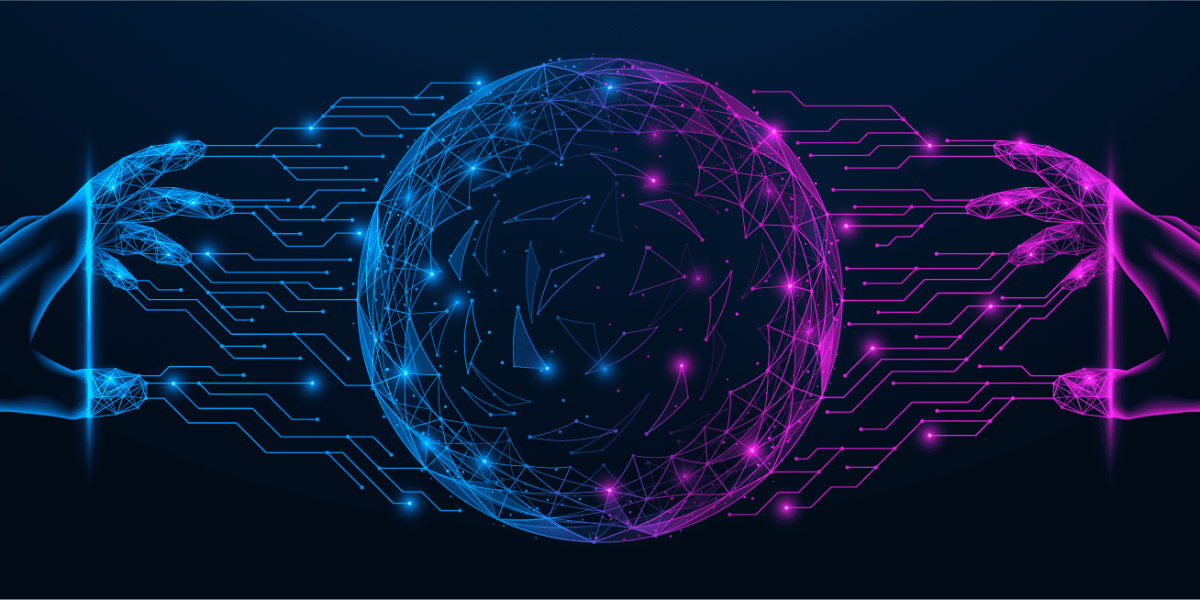 The case for investment optimism: 4 tech advancements that will underpin long-term returns (and the 3 stocks you need to profit from them)

It’s been a somber year for investors. Inflation is running hot, interest rates are flying up and public and private market valuations are, by and large, in the gutter.

Altman’s comment highlights a paradox that more investors should be aware of: that in a time of war, scarcity and economic downturn, amazing – even revolutionary – advancements in technology are happening.

Today’s cyclical downturn will be temporary. But the rapid advances in technology will be structural. As hard as it may feel today, investors should be lifting their gaze from the economic and market carnage toward the horizon and structural transformations – particularly artificial intelligence (AI) – that are creating remarkable long-term investment opportunities.

The long-run trajectory is up

It isn’t easy for investors to focus on the positive, particularly during challenging markets like today. Rapid declines are far more ‘newsworthy’ and ‘sensational’ to follow. As investment writer Morgan Housel says, good news typically accumulates slowly, bad news tends to happen fast. “Growth always fights against competition that slows its rise … But everyone gets out of the way of decline.”

Yet growth – even modest growth – when sustained over long periods of time, is far more powerful and significant than any short-run decline. Amazon, for example, has been hit by sudden cost inflation and excess capacity which has depressed earnings. Its stock is down by a third in the past six months. But investors are forgetting the long-term story: a likely 10x rise in annual earnings power in the next 10 years.

It is also worth remembering that, despite short-term volatility, the long-run trend in equity returns is up. Drawdowns, unfortunately, are a part of the journey – but the journey itself is one worth taking: over the long-run stocks have proven to be remarkable wealth generators, more than doubling every 10 years, on average, over the last century (including the Great Depression). 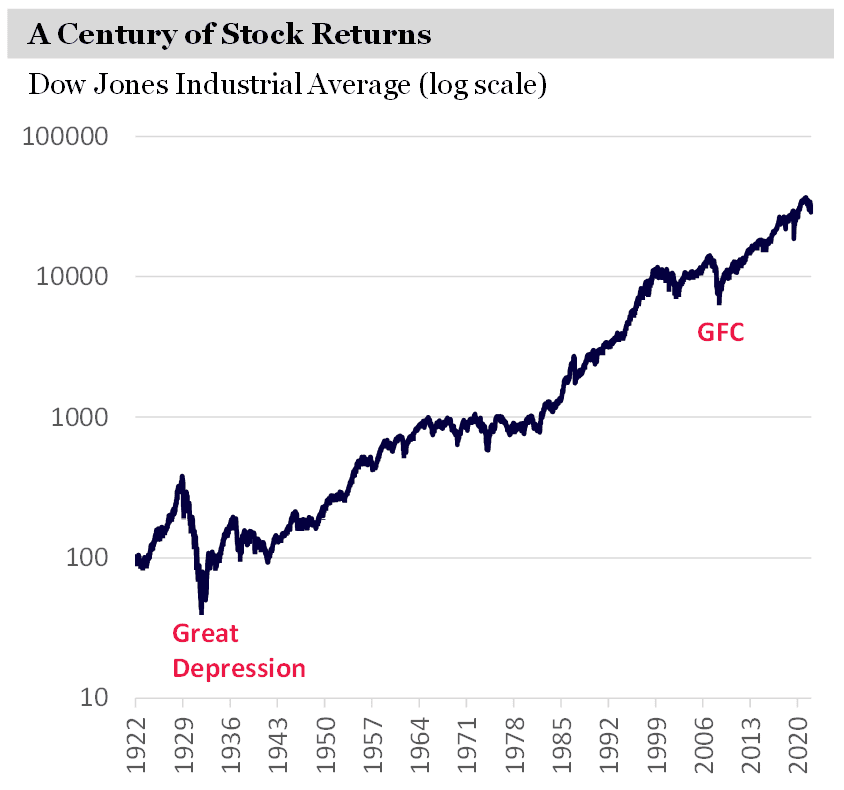 While markets were falling this year, the pace of tech innovation is accelerating. This does nothing to stem today’s fears of inflation, interest rates and recessions, but it bodes well for long-run profits and new market opportunities. Here are several developments that have caught our eye recently.

Facebook owner Meta has significantly advanced the development of virtual reality (VR). It has added extraordinary new features that makes the melding of technology with humans more seamless. That includes enhanced facial expression and eye direction recognition, and electromyography (EMG).

EMG is particularly amazing. While not yet released to the public, Meta has demonstrated an ability for users to control their device simply with slight movements of hands and fingers. This is achieved by EMG sensors recognizing and translating the nerve signals running down the user’s arm.

While many focus on the use of VR in gaming, social and fitness, Meta is betting that there will be many important uses in professional settings, including presentations, collaborations and professional training. It has partnered with Microsoft to bring VR to many of our favorite enterprise applications, including Teams.

Hardly a week goes by without a significant advancement in the field of artificial intelligence (AI). Large companies and organisations are developing enormous, complex and seemingly ‘magical’ AI models. But everyday people are also building on top of these large models to develop powerful solutions to everyday problems, such as writing assistants Grammarly and Jasper.ai.

Large language models – AI that analyses language, such as OpenAI’s GPT-3 – are learning the statistical properties of language, which allows it to better predict the next word in a sentence, helping tasks such as machine translation. Large language models will enable a dramatic evolution in how humans interact with technology over time. As Open AI’s Altman describes it, interactions will be more like a continual dialogue – or conversation – with your AI model that will feel like you’re not only talking to your smartest friend, but thousands of smart friends who are domain experts working at superhuman speed to do whatever you need, wherever you want, and with full comprehension of language.

Text-to-code tools are now also translating natural language into completely written code. And text-to-image tools are unlocking an abundance of creative opportunities, including art generation. Here is what OpenAI’s text-to-image generator, DALL.E 2, came up with given the following instructions: “A van Gogh version of a paradox of amazing advancements in technology amidst a gloomy economic downturn.” 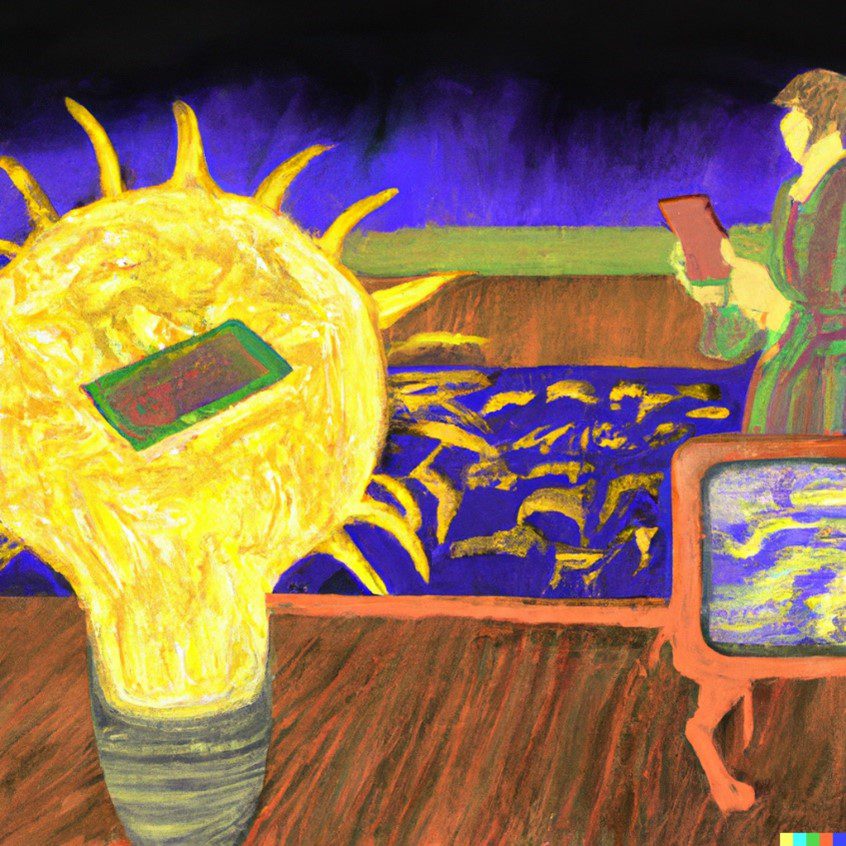 Tesla has also demonstrated its first humanoid robot, Optimus. While seemingly unrelated to manufacturing and selling cars at first glance, Optimus leverages much of the same technology, including object labelling and autonomous driving, that are embedded in Tesla’s ‘robots on wheels’. 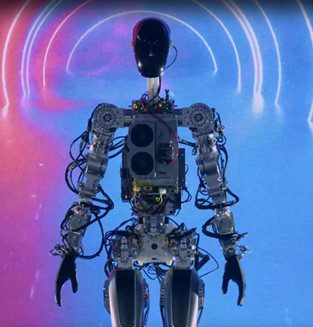 Tesla plans to start these robots on very simple tasks inside the Tesla factories, then gradually expand them into other uses over time. Like all great data networks, each Tesla humanoid will continually learn – not only from itself, but also from all other humanoids.

The long-run potential of highly capable, low-cost humanoid robots is mind-bending. According to Tesla founder, Elon Musk, humanoids could unlock a period where economic growth is boosted to the extreme by new, efficient, low-cost, robot workers. “A future where there is no poverty… you can have whatever you want in terms of goods and services,” said Musk.

This is another example of a remarkable progress towards the goal of lean, limitless energy. As important and exciting as this is, many investors missed it, distracted instead by the sharp stock price downturn that has characterized this year.

There are low-risk ways of profiting from these developments. The surest, in our view, is by owning the world’s leading ‘hyperscalers’, particularly Amazon, Microsoft and Alphabet.

‘Compute’ is the fuel that underpins all advancements in technology today. And compute is what these three large-scale cloud computing platforms sell in a low-cost, flexible and secure way, which means they are well placed to profit from developments in VR, AI and robotics.

They also have extraordinarily high barriers to entry. Amazon, Microsoft and Alphabet are spending over $US100 billion per year in R&D and nearly that again in capital investments. The chances of new competition catching them is low.

These stocks are also providing excellent value. With their stock prices each down by approximately one-third this year, they represent a compelling investment opportunity that will benefit from the amazing technological transformations that are unfolding today.

With so much bad news abound, it can be difficult to see any light amidst the economic darkness. But in engineering labs all around the world, extraordinary advancements in technology are being made.

In the not-too-distant future, the economic cycle will turn, and the market’s myopia will fade.

When it does, the new market opportunities unlocked by today’s technological advancements will come into focus. And the market valuations of the most advantaged tech leaders will re-rate upwards.

Investor patience have been tested this year. But a stoic review of the extraordinary positive trends underlying the economy’s surface should lead investors to a place of optimism.

Note: Montaka is invested in Amazon, Microsoft, Meta and Alphabet.