After COVID-19, mRNA-leader Moderna has the potential to become a major pharma disruptor

The potential for Moderna to exploit mRNA and massively expand its operational scope makes it a compelling investment opportunity that the market is failing to recognize.
Back to Long Research

“Necessity is the mother of invention” is a timeless proverb that originated thousands of years ago in ancient Greece by the philosopher Plato.  Yet it remains incredibly relevant today, particularly in the wake of the COVID-19 pandemic.

Until COVID-19, the shortest time taken to develop a major vaccine was 10 years (measles). Others had taken over a century to develop (Typhoid). It is a mind-blowing feat of ‘invention’ in the face of ‘necessity’, that the COVID-19 vaccine was invented in under a year and has been administered over 10 billion times already.

From Virus Discovery through to Vaccine Development (Years) 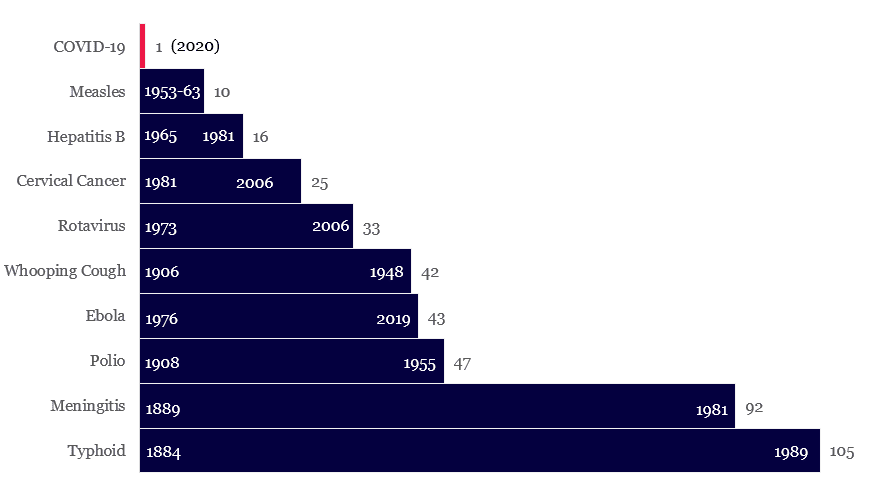 Perhaps even more incredible than the vaccine, was the breakthrough mRNA drug discovery platform that it was built on and has the potential to benefit humanity for many decades to come.

Traditionally, pharmaceutical drug development was like drilling for oil: a lot of investment but no certainty of a return. mRNA has the potential to revolutionise the pharma industry and make drug development far more repeatable, scalable and successful.

We believe mRNA unlocks enormous upside for industry leader Moderna, with CEO Stephane Bancel noting that mRNA will make pharmaceutical development, particularly vaccine creation, more like coding software. “We use the same four-letter [DNA] code [to encode all of our mRNA] for every vaccine and drug … we can scale the number of products we have in development at a pace that has never been done before”

The potential for Moderna to exploit mRNA and massively expand its operational scope makes it a compelling investment opportunity that the market is failing to recognize.

mRNA is the software system of the human body

At the deepest level of human biology, proteins serve as the basic building block of life.  Every cell in the body contains several thousand unique proteins that are essential for the functioning, regulation and structure of all human organs and tissue. We cannot overstate role of proteins.

When the body needs to produce a protein to assist with a specific physiological function (e.g., muscle development, digestion, fighting an infection, etc.) it will get the instructions for the relevant protein from DNA (Deoxyribonucleic Acid) contained within the nucleus of a cell.

DNA serves a similar function in the body to a hard drive in a computer and is effectively a repository for storing huge volumes of data. To transmit the protein instructions contained in DNA to another cell that can produce proteins (the ribosome), the body encodes some software called messenger RNA (Ribonucleic Acid) or mRNA.

Once mRNA delivers instructions to the ribosome, the body installs the software and creates an application in the form of a protein which has a specific function. mRNA effectively functions as the human ‘software system’ with every cell utilizing mRNA to access instructions and install applications (proteins) in real-time for all aspects of human biology to function. 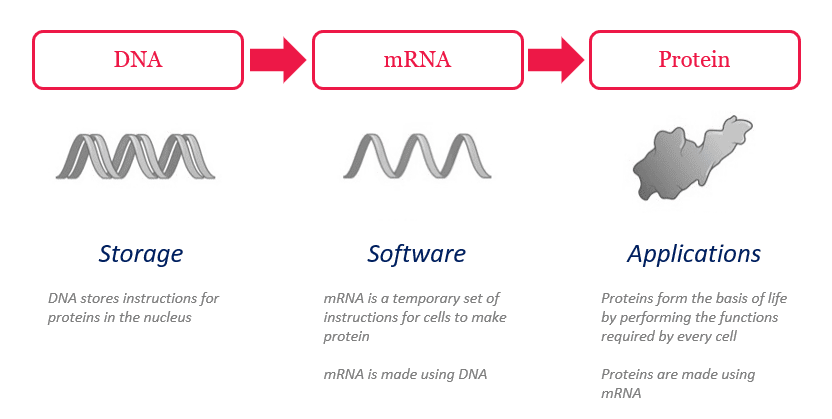 Moderna was very early in identifying COVID-19 as a threat and within days of coming across the virus it had sequenced its genome (DNA) and encoded the spike-protein structure into mRNA all by the end of January 2020 (well before the general public had even heard of the virus).

Regulators took nearly a year to assess the efficacy and safety of that very mRNA instruction set that was sequenced within days of discovery. It went on to become the Moderna mRNA vaccine and has been administered several billion times since.

Moderna has created an mRNA platform for pharma development

An underappreciated aspect of the Moderna ecosystem is its groundbreaking lipid-nanoparticle (LNP) technology that enables the delivery of mRNA to the body’s cells.

By design, mRNA has an extremely short half-life (degrades rapidly) in the body, which makes synthetic versions of it virtually unusable by humans to treat disease.

This was a significant challenge across the industry for many decades, with some LNPs exhibiting an excellent delivery profile, but they contained lipids (aka fats) that caused liver toxicity and could lead to death.

Moderna developed a portfolio of high-efficacy LNPs which are protected by a large patent estate and represents a significant competitive advantage for the company given the complexity surrounding this part of the mRNA process.

In fact, according to several industry experts, Moderna’s LNPs are the de-facto ‘gold-standard’ for mRNA delivery in the industry, with significant trust engendered with the health regulators and the public over the course of the pandemic.

Moderna’s LNP portfolio may eventually evolve into a platform for mRNA technology, acting as the delivery mechanism for myriad mRNA solutions created by numerous drug developers leveraging its technology. Examples of similar situations today include the AppStore for iPhone applications, Windows for software programs and even the internet for websites.

The COVID-19 pandemic and the development of the mRNA vaccine has showcased the cutting-edge platform that Moderna has created. The mRNA approach is fundamentally different from traditional medical treatments and has the potential to revolutionize the way in which the world approaches drug discovery.

Historically the pharmaceutical industry has engaged in time consuming, trial-and-error methods to find effective treatments for disease. As mentioned, this is akin to drilling for oil in a desert: you either strike it rich, or simply get a sunburn.

Instead of having to start drug development from scratch, Moderna draws on insights from its ever-expanding datasets to create targeted and far more efficient solutions to problems.

Moderna was also able to leverage data-driven insights to generate a two-to-three-fold increase in protein production elicited by its mRNA treatments. AI was also credited with helping it develop an enzyme that lowered byproduct waste in its manufacturing process, which meaningfully increased product yields, translating into higher margins for the business.

Thus far, mRNA has only been commercialized as a vaccine for disease prevention (aka a prophylactic). Vaccines alone are a US$35 billion annual revenue opportunity excluding COVID-19. While $35 billion is nothing to sneeze at, the added benefits of disease prevention on society are profound.

The CDC (Centers for Disease Control and Prevention) estimates that over the last two decades, childhood vaccinations have prevented 322 million Americans from getting sick, avoided 21 million hospitalizations, and saved 732,000 people from death. While the human benefits have been immense, the financial savings are jaw dropping, with vaccines estimated to have saved the United States $295 billion of direct costs and $1.3 trillion in social costs over that period.

Given the incredible product market fit and customer value proposition of vaccines, it may come as a surprise that out of the 80 viruses discovered since 1980 only 3 have commercialized vaccines.  Moderna estimates that the total market for uncommercialized vaccines that have no treatment is over $100 billion annually, meaning the vaccine market could increase four-fold from today’s levels.

In addition to this, we can expect COVID-19 to remain with us for a very long time as pandemic diseases tend to have very long-tails. For instance, the 1889 Russian flu pandemic continues to be responsible for up to 5% of acute respiratory infections today … more than 130 years later!

Moderna currently has 31 different vaccine development programs underway and all of them serve a significant, unmet need in society. 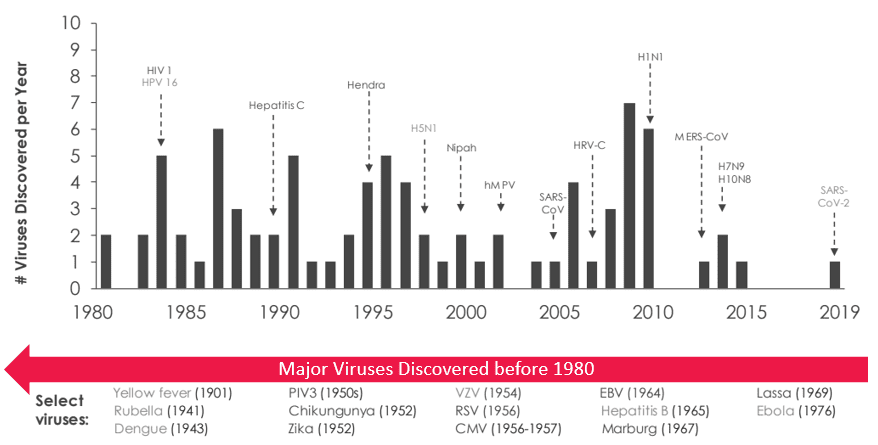 While disease prevention is the goal of the prophylactic market (vaccines), treatment of diseases (once people are sick) is a far larger industry (therapeutics). Spending on therapeutic pharmaceuticals is more than six-times larger than the vaccine market today and represents a $200 billion annual revenue opportunity.

While time-to-market for therapeutic drugs is often far longer than a vaccine, Moderna currently has 12 different therapeutics programs underway.  These modalities include cancer, autoimmune disorders, heart disease, cystic fibrosis, among others. Several of the world’s largest and most established pharmaceutical companies including Merck, AstraZeneca and Vertex, have partnered with Moderna to jointly leverage Moderna’s platform, cutting-edge capabilities, and extensive data advantages in their pursuit of the next pharma frontier.

A Platform for both Prophylactic and Therapeutic Drug Discovery

Another positive byproduct of COVID-19 has been the powerful impact on Moderna’s brand.

Moderna is now an established and trusted household name in pharmaceuticals across the world. Achieving such status usually takes several decades, with only a handful of industry players earnings such reputations, such as Johnson & Johnson, Pfizer, Merck, Roche and Sanofi.

Moderna’s market share in mRNA vaccines across advanced economies has moved into the 40-45% area in a relatively short time.  These levels are reflective of the current mRNA duopoly it holds in tandem with Pfizer/BioNTech. Even in Germany, where BioNTech is a ‘national champion’, Moderna has increased its market share to around 40%, highlighting both the power of its brand and the efficacy of its product. 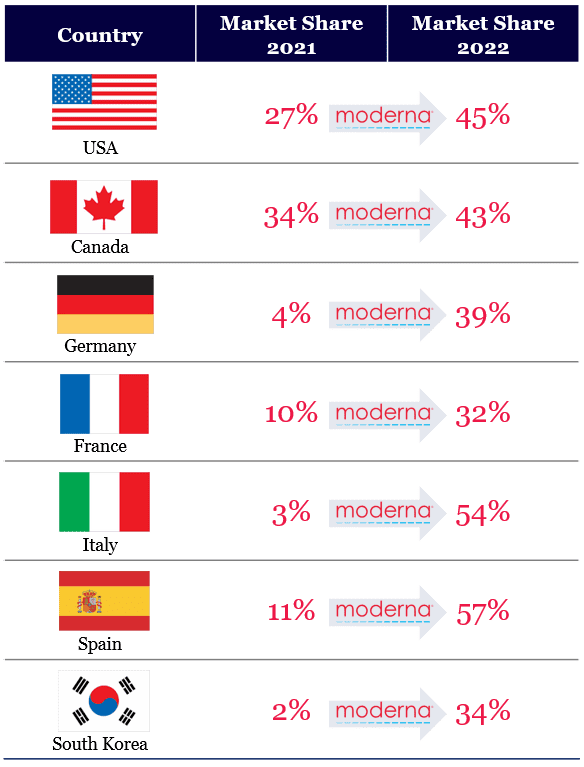 Moderna has clearly demonstrated the potential of mRNA as a byproduct of the pandemic. How broadly it can expand from here into adjacent vaccine use-cases and the larger, more lucrative therapeutics market remains to be seen.

The potential is enormous and Moderna, as the industry leader in mRNA, shares many parallels with other industry disrupters that have come before it, including Tesla in electric vehicles, Amazon’s AWS in cloud computing, and Microsoft in PC operating systems.

The market of late has significantly discounted the probability that Moderna will disrupt traditional pharmaceutical drug discovery with its industry-leading platform and market position. In our view, this conclusion massively underestimates the potential of Moderna and we happily hold a position in the company.

The Market Underestimates the Long-Term Potential of Moderna 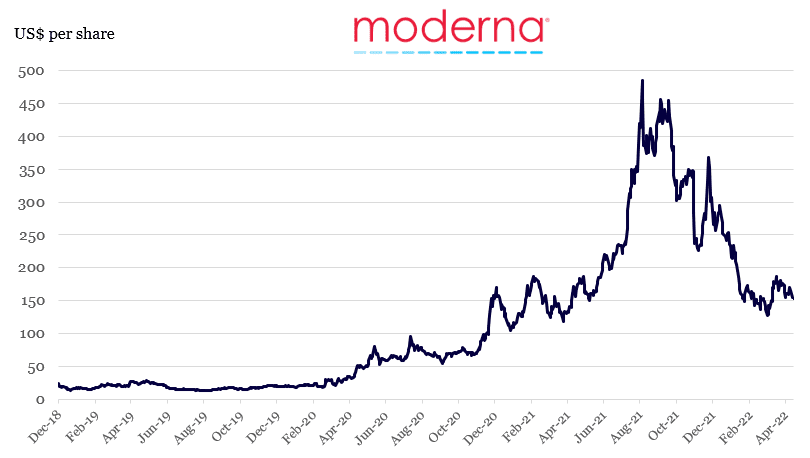 At Montaka Global we lean on multi-disciplinary perspectives to draw insights from adjacent sectors and strive to own the very best businesses that are most likely to be winners over the long-term.

Read our latest AI whitepaper now by sharing a few details with us: 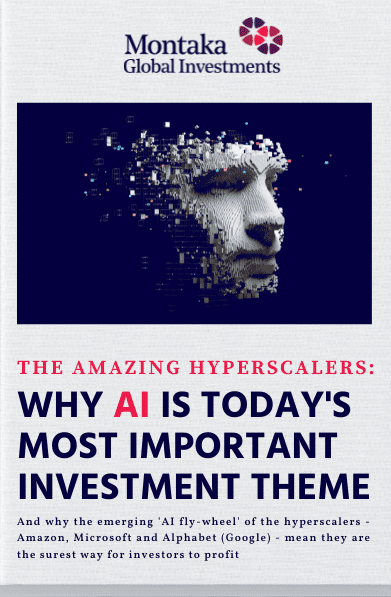